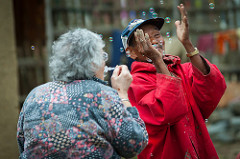 He was well into his 90s and had a girlfriend. He told me with quiet pleasure about their closeness. He was sure God had brought them together.

That is, each had a need for someone with whom to share life at the deeper levels. It was a human yearning experienced to a greater or lesser degree by us all.

The word, companionship, comes from a French compound word meaning to partake of bread together. Human companionship is an interpersonal relationship that’s like sitting down together for an intimate exchange of interests, goals or even just long chats. Both parties are enriched thereby.

But intimacy is not enough. Undergirding this kind of sharing there must be trust, honesty, loyalty, and sometimes gentle candor. It can be man-to-woman as with my friend, or woman-to-woman or man-to-man.

Jonathan saw David’s life as under threat. So why didn’t Jonathan side with his father anyway? Isn’t “blood thicker than water?” For Jonathan, justice for David was a higher value than facilitating his father’s murderous jealousy.

The Book of Proverbs says: “A friend loves at all times, and a brother is born for adversity.” (Proverbs 17:17) Real companionship includes amazing loyalty “at all times,” even when a crisis might threaten a relationship.

The Book of Proverbs also says: “A man of many companions may come to ruin, but there is a friend who sticks closer than a brother” (18:24).

That is, if we embrace all offered friendships without discrimination, we may discover when a special need surfaces that many of those friends are only “fair weather companions.”

But, there is such a thing as enduring, storm-tested companionship, but it must be sought out and nurtured with care. Real companions, the Proverbs seem to caution, are one in a thousand.

The elderly gentleman who told me of his wonderful discovery had certainly found companionship. The two exchanged glances, shared resources at lunch, and participated together deeply in their common faith.

It’s good to ask ourselves from time to time: do I experience the companionship that nurtures health and enriches my life. And does it at the same time add enrichment to the life of someone else, reflecting my capacity to be loyal and truthful?

We should all be working on this because, whether in a friendship or a marriage, companionship undergirds love like nothing else. Without real companionship even marital love may wear a bit ragged.

One thought on “Did You Know Companionship Enriches Love Like Nothing Else?”

To receive my articles by email each week click here

If you like what you read here, please consider subscribing to the blog using the links above. And please feel free to leave comments -- I'd be glad to hear your thoughts and feedback! DNB.